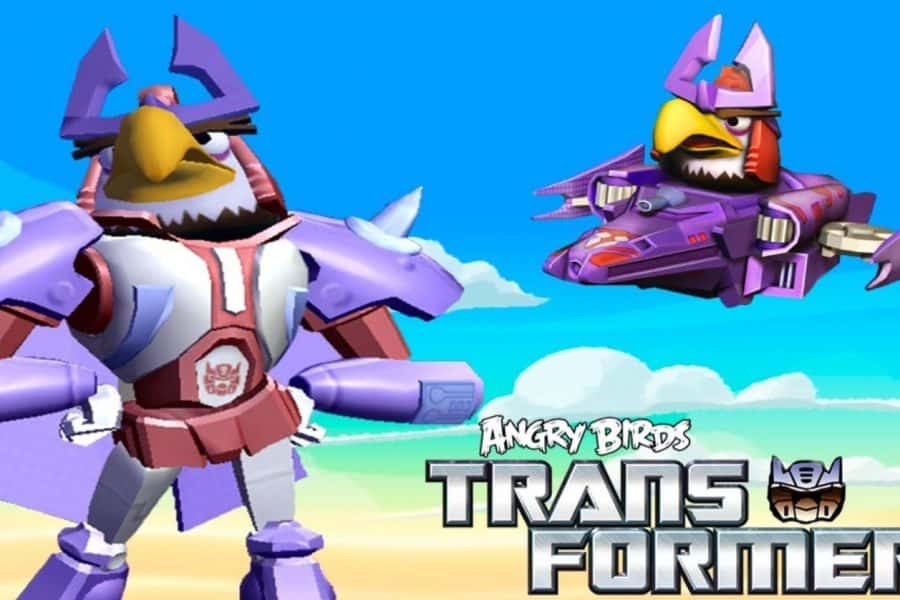 Traditionally, Angry Birds is a physics-based skills game involving the firing of birds at different structures in order to knock them down and unlock the next level. Tradition’s been thrown aside for Angry Birds: Transformers, however, which in direct contravention of the usual format is a side-scrolling shoot-em-up that marks a dovetailing of two massively popular franchises: Angry Birds and Transformers. Critics haven’t been hugely kind to Angry Birds: Transformers, but this review tries to look past the insistent monetisation that has become typical of the latest Rovio titles, revealing a game that’s wonderfully presented and that has some decent Transformer-themed gameplay to please fans of the two relevant franchises.

This game has a lot in common with the traditional mechanics of Angry Birds, only the catapult has been done away with and instead you’re running as a robot whilst gunning the familiar, teetering structures lurking in the background. You don’t have to worry yourself too much with controlling the running since it’s an auto-runner; your robot character runs across the level automatically, allowing you to save your focus to aim and shoot at the various structures in the background in which the iconic green pigs are (perhaps foolishly) camped out.

The counterpart to the variety of birds seen in the very first Angry Birds is the variety of robots in the game, each with their own special weapon that’s more effective against certain kinds of structures (be they glass, wood, or stone). Aside from this, the aim is pretty much the same as in Angry Birds. It’s a bit more on-the-fly however, and arguably more challenging due to the fact that your robot character is running across the screen and you must identify a weak spot in the structure much more quickly than you would if you were playing the original Angry Birds where the only movement is the catapulting of the birds themselves.

Now, it’s a shame to have to complain about monetisation in Angry Birds: Transformers, but it’s pretty difficult not to do so, seeing that it takes up quite a bit of the game and all. You’re lured in at first with fast progress and admittedly excellent gameplay, but the pay barriers soon rear their heads. While there’s no energy system (thank god), there are a number of different timers that you have to wait for in order to carry on with the action.

Barriers to your progress include the healing process, which can take varying quantities of time depending on how damaged you are in each level. If you upgrade too, you’re going to have to wait some time before it’s ready to be applied/used. Of course, this encourages you to open up your real wallet to spend on the in-game currency, and this can get costly if you’re playing the game a lot. The premium currency can be found in the game, but instances of these findings are few and far between.

Official Transformers fans will enjoy the fact that each of the coloured birds from Angry Birds are represented as Transformer equivalents. Optimus Prime acts as the classic Red Bird, for example, while Bumblebee assumes the role of Chuck, and this pattern continues thusly. Perhaps more noticeably, the Transformers-esque destruction of your surroundings also stands out more so than the relatively mild destruction of structures seen in the Angry Birds games.

The destruction of the structures central to the gameplay is also facilitated by the fun-to-collect “Energonicons”. These are effectively items (48 of them to be found in the game in total) that you can collect and build upon, but which also give you extra-destructive capabilities that other destruction games in the genre don’t have. Take the Boomshake, for example, which creates huge earthquakes to help destroy the structures. Even more fun, however, is the way in which you are able to combine the materials you find in the levels (or which you can purchase through IAPS), crafting your own Energonicons and giving yourself even more healing, money-collecting, and (most importantly) destructive powers. This is about as Transformers (particularly the Michael Bay denomination) as it gets.

There’s still quite a bit of Angry Birds to be found in this game however, not just in the placement/inclusion of the structures in the background but in the overall design. The ultra-mechanical and often dark nature of Transformers (particularly some of the new films) is brightened up by the vibrant colours you’d expect of pretty much any of the Angry Birds games. It’s a balance well struck however, resulting in a unique mech/casual look that should appeal to both Angry Birds and Transformers fans.

Other Features and Conclusion

The social aspect of the game is relatively limited, though you can play co-op with one other friend if you sign in with Facebook, which is enjoyable enough. Other notable features include the ability to transform from mechanoid to vehicle form during levels, which is a feature designed to fit in with the mechanics of buildings toppling over – this results in some pretty fast-paced and enjoyable escape-like scenarios where you must dodge and drive your way out of danger before morphing back to your original form in order to shoot at more buildings.

Finally, there’s no arguing with the look of the game. The graphics are as sublime as you’d expect from a game that’s a hybrid of two of the world’s most recognisable franchises, not to mention it’s created by slick-game champion Rovio.

If you absolutely can’t stand paying for your entertainment, or are simply sick of your progress in each game being held to a ransom that requests you spend your real money to get by more quickly, then there are plenty more destruction games lurking out there on the internet. Angry Birds: Transformers is still going to be the most well-polished and slickly designed game of its kind you’ll find, however.